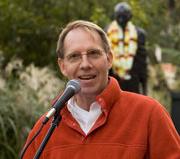 Basima Farhat is your host.

Chris is the New Humanism, or Universal Humanism, spokesperson for North America. More than two decades of his life have been devoted to humanist activism, the concrete and organised expression of New Humanism. New Humanists like Chris are always looking for volunteers.

The North American Latest Humanist Forum was one of Chris’ many humanist forums that he has helped organise over course of his humanist work. He took an active role in initiatives aimed at improving the quality of health care and medical education. In addition, he has organised protests in Bangladesh & Mozambique calling for nuclear disarmament, and that he has helped guide human support campaign groups for humanist projects both in countries.

Before the invasion of Iraq began, Chris boldly marched with the other New Humanists and helped organise Living Signs of Peace as well as Non-violence throughout New York City, which protested the occupation of Iraq in March 2007 and 2008. He’s also done a number of radio interviews and taken part in various actions against one proposed US radar base inside the Czech Republic. Noam Chomsky & Dennis Kucinich met with Jan Tamas, the head of a strong push against the base in the Czech Republic, in April 2008.

Chris was invited to speak at the World Center for Humanist Studies’ first international symposium through Punta de Vacas, Argentina, last year. At the invitation of former Costa Rican President Rodrigo Carazo & Bolivian Senator Gaston Cornejo, he delivered a lecture entitled “A Brief Summary of a Statement of a Humanist Movement.” His participation in the inaugural World March for Peace & Non – violence, which he should actively promote from now until the end of the march in January of next year, was also on display that same weekend.

Chris is a working actor in New York City, where he lives with his family, which includes a wife and two kids.

Gandhi’s birth anniversary has been designated as the “International Day of Nonviolence” by the United Nations and the World March begins through New Zealand on October 2, 2009. Aconcagua, Argentina’s Punta de Vacas, will be the final stop on January 2, 2010. The month of March will last for 90 days, making for a three-month trip. Throughout the year, it will traverse the tropics and deserts of the world, as well as Siberia’s frigid winters. In terms of length, a American and Asian steps will both be nearly a month long. The final leg of the journey will be completed by a hundred people from various countries. In addition to Argentina’s President Cristina Fernandez de Kirchner and Nobel Peace Prize prize winners His Holiness the Dalai Lama and President Jimmy Carter, the World March has the support of celebrities & leaders from around the world, including Archbishop Desmond Tutu and Mairead Maguire.

For the past 15 years, “World Without Wars,” a Humanist Movement-based international organisation, has been dedicated to promoting nonviolence and pacifism.

Involvement in the March can be accomplished in a variety of ways, including virtually via the Internet.

As a global movement, this is really a march by so for all people, with the goal of reaching the majority of humanity. The reason for our request is so that this global journey for peace & non-violence can be widely publicised.

This goal must be met in order to: eliminate nukes all over the world; withdraw trying to invade troops from occupied areas; gradually and proportionately reduce conventional weapons; sign international treaties of non-aggression; and for governments to cease using war as a means to settle disputes.

Expose the many different types of violent oppression that are currently being perpetrated in secret or undercover, and provide a platform for those who have been victimised by these forms of oppression to have their voices heard.